Herbs You Should Grow in Your Outdoor Kitchen 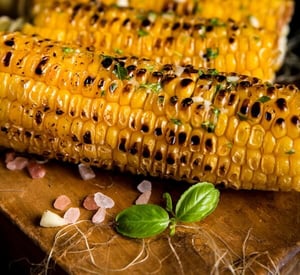 What herbs should you use? We're SO glad you asked! There are countless delicious herbs out there worthy of your tastebuds, but there are a few that are ideal for the types of foods you'll be preparing in your outdoor kitchen.

Basil is great no matter what, but if you have a pizza oven in your outdoor kitchen, basil is a necessity. Imagine the Margherita pizzas you could have!

Did you know that basil...

While thyme and rosemary are two completely separate plants, we think it's smart to grow both because most recipes that use one also include the other. These herbs along with basil are also common additions to gin drinks and other cocktails.

Did you know that thyme and rosemary...

Unless you're among those who believe cilantro tastes like soap, we highly recommend growing this plant! Fresh cilantro will really spice up your taco, salsa, or guac. Don't look for a cilantro seed to plant, though. Cilantro is actually part of the coriander plant.

Did you know that cilantro...

Parsley isn't just a garnish; it's actually the perfect addition to dishes that contain a combination of foods because parsley has a unique bitterness that balances flavors while also enhancing them.

Did you know that parsley...

As a member of the garlic and onion families, chives add exquisite flavor to food and also enhance its appearance with a touch of elegance.

Did you know that chives...

Whether or not you supposedly "have a green thumb," you almost certainly can grow the herbs we mentioned in this blog. Try one at a time, and see how it goes. We think you'll be surprised at how easy it is, and we're sure you'll really be hooked once you taste the difference in your food!